The Ninth Session of the Conference of the Parties (COP9) to the WHO Framework Convention on Tobacco Control (FCTC), based in Geneva, will run from 8 to 13 November. It will be held online and behind closed doors.

Dubbed ‘sCOPe’, or ‘streaming Consumers On Point everywhere’, the five-day livestream will be simulcast via YouTube and Facebook. Presenters and panellists will challenge and scrutinise COP9 – including who’s influencing and funding its efforts to demonise vaping, and why.

American billionaire Michael Bloomberg’s sponsorship of the WHO’s direction on tobacco control and his various foundations’ undue interference on foreign governments, their domestic health policies and Non-Government Organisations (NGOs), will be fully exposed and the documented evidence made public.

“Before the COVID-19 pandemic, consumers were planning to front up to COP in person and show media our increasing anger for being shut out, once again, from the proceedings. The FCTC’s decision to delay COP9 and host it exclusively online, with no discussions to be publicly released, meant consumers had to take alternative action. Hence, the development of sCOPe,” says Nancy Loucas, event organiser.

“sCOPe is our response to being excluded from the table, as the main stakeholders, of the discussion and decision-making process that directly impacts our health and our right to make informed decisions,” she says.

A co-operative effort by THR consumer organisations globally, sCOPe is totally independent and non-aligned. Its format and content have been developed to inform the public and media, as well as the millions of ex-smokers now using safer nicotine products.

With only weeks to go, organisers are now calling on vapers and consumers of other safer nicotine products to promote and mobilise around sCOPe.

Ms Loucas says the WHO’s lies continue to muddy the waters. COP9 organisers publicly declared in July there would be no discussions or decisions around THR products until COP10 in 2023. However, recent agendas of the WHO’s regional organisations reveal they’ve been busy preparing for COP9 with workshops on emerging and alternative nicotine products.

“We know COP9 will do its best to totally undermine vaping despite it safely helping millions of smokers over the past decade to quit deadly cigarettes. However, we will not be silenced. sCOPe is going to expose COP9’s motivations and actions. Sunlight is the best disinfectant and rest assured this international conference will get a lot of light shone on it,” says Ms Loucas.

For each of its five days, sCOPe will see presenters, panellists, experts and consumers focused on five key themes: What is Tobacco Harm Reduction, Nicotine Is Not The Enemy, How Can A Tobacco Product Be Safer, Who Are Consumers, and Advocacy And Strategy.

sCOPe’s event organiser says FCTC member countries that have adopted progressive THR policies and have seen smoking rates fall significantly will also be closely assessed. sCOPe will be demanding that delegates from these countries tell their respective success stories at COP9 and uphold the rights of adults to choose safer options.

“Given over one billion people in the world still smoke cigarettes, it’s outrageous the WHO continues to actively obstruct debate and access to safer alternatives. Its poisoned position, however, is increasingly untenable. The WHO’s anti-vape crusade is driven by money not science, and sCOPe will prove it,” says Nancy Loucas.

sCOPe is a round-the-clock international broadcasting event taking place throughout COP9. The five-day livestream, from 8 to 13 November, will feature world-leading THR experts and consumer advocates for safer nicotine products. sCOPe will be simulcast on YouTube and Facebook. Despite being shut out of COP9, vapers have vowed they will not be silenced. 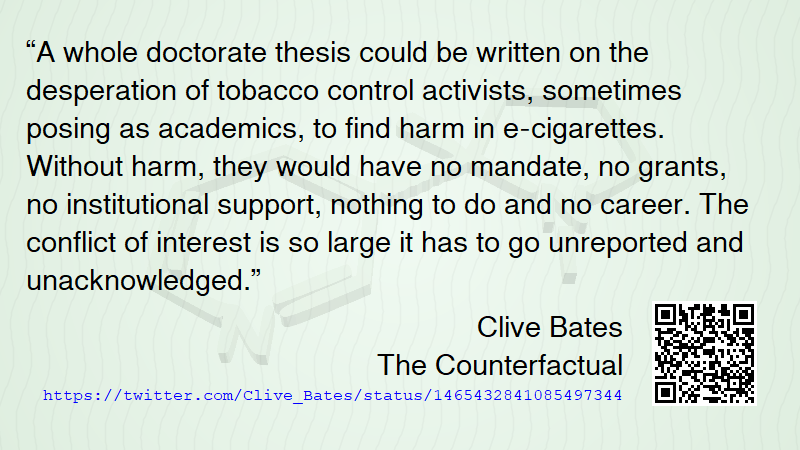